Since 1978, Afghanistan has been at war. Nevertheless, Josh Cahill wants to visit the capital, Kabul, something he’s been dreaming of since he was a child. An adventure with an uncertain ending… With photos by Jim Huylebroek.

The sun is shining into my room, it’s a cosy morning. American Black Hawk helicopters fly over the building and yes, I’m a little nervous. Today, I will explore the city.

Kabul. Since my childhood, I’ve dreamed of seeing this place. Something has always fascinated me about this country in Central Asia. In fact, has fascinated me so much that I can blend out all the terrifying news that is reported from Afghanistan’s capital. I enjoy being one of very few tourists in a city, an experience I made while hitchhiking in Iran, in Iraq or during the Arab Spring. In times of globalization, such places are very rare – I obtain it through an increased risk. But to me, it’s worth it. 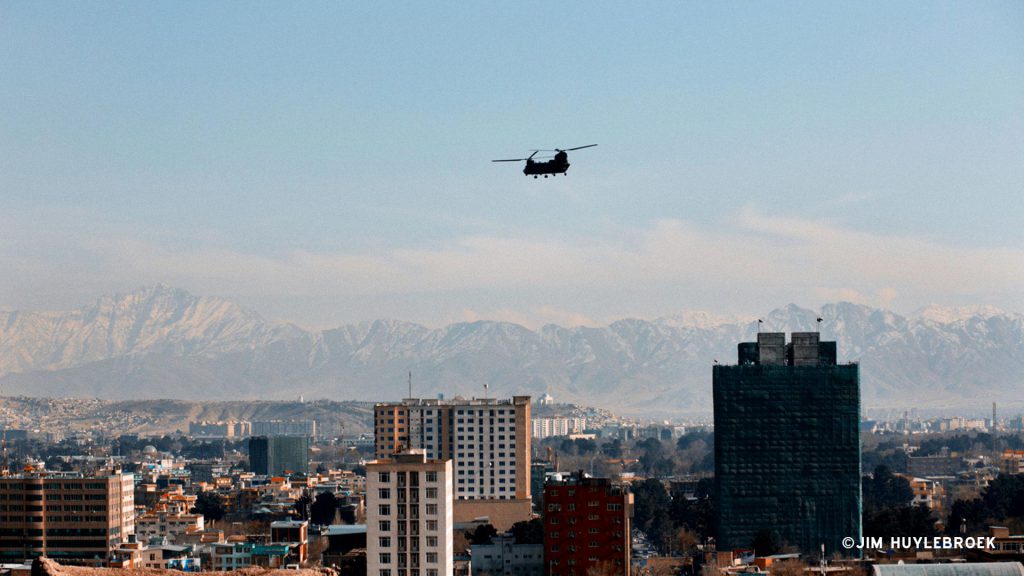 Now, I am actually here and can’t wait to get out into the streets of Kabul. Grab my camera and go. Am I afraid? No, I feel more like Neil Armstrong, before he became the first person to set foot on the moon. And although I am not on some distant planet, the world here is still completely different: a postwar capital. Kabul is among the most rapidly growing places in the world, with a generation of people who have never experienced true peace. I want to meet them.

Overwhelming scenes. Young bootblacks sit at every corner, the traffic is dense and the crossings chaotic. Everything is grey, as if covered by a thick layer of dust. A few women in black burkas cross to the opposite side of the street when they see me.

Some freeze, stopping their daily business; they can’t grasp that a young blond man is ambling past them.

Others call »Welcome to Afghanistan!« A group of teenagers eyes me suspiciously.

In order to better understand this country, I want to plunge into its history. My first stop is the ruin of the Darul Aman Palace.

In former times, the king lived here, but for over thirty years, this impressive building has more and more deteriorated. Some say the palace is cursed. In any case, many people lost their lives here.

Alone the drive to the palace is spectacular. A long boulevard takes you directly there, and only upon arriving does the smog slowly lift its curtain and set the view of the seemingly mysterious ruin free. A big arc of suspense, entertainment à la Afghanistan. To me a special moment, to the locals everyday life.

The palace is fenced in with barb wire, soldiers are standing on its roof. A very old man squats between a few plants and bushes. He’s trying to tell me that he used to be the gardener of Amanullah Khan, but it’s hard to believe: the king ruled Afghanistan from 1926 until 1929. That would make the man at least a hundred years old, and that in a country where the average life expectancy is below sixty. But who knows? I pretend to believe his story. A little bribe gets me into the building. There are bullet holes everywhere. The palace, which was built in the German tradition, nearly only consists of rubble, debris and graffiti. Really not your typical sightseeing, far from a guided tour through a museum.

These are powerful impressions, this place is still part of the past, but much more a symbol of the present.

Vis à vis, the future is being built: the new sparkling parliament will soon be hosting the government. This is called progress and one can tell how much the people care not to stagnate. 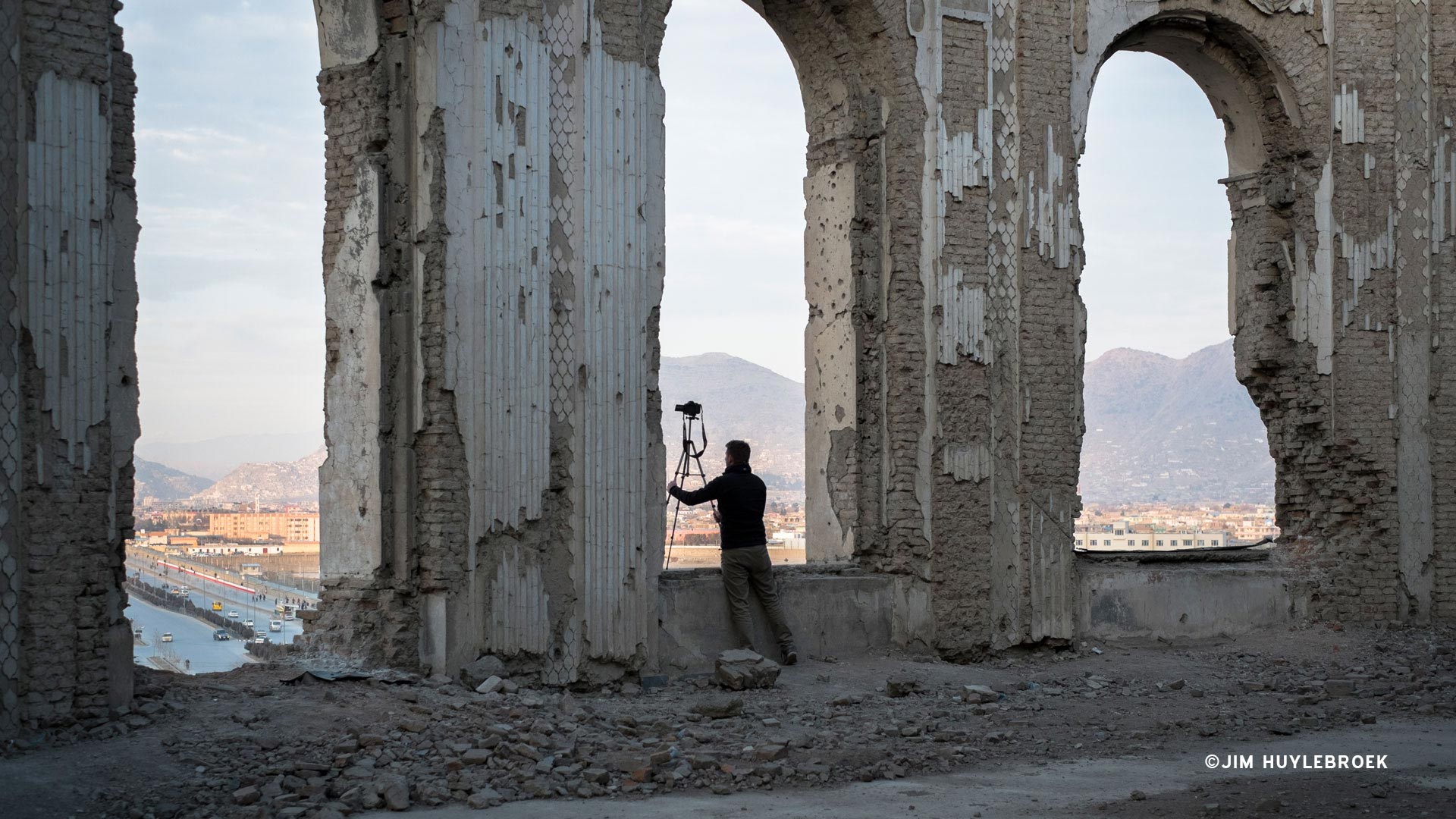 The next morning, I stroll through the big market, time-travelling into the past. Cows, goats, chickens, heaps of spices, western and traditional clothes, and oodles of vegetables. Life pulsates. People bargain, clamor, laugh and rant. No comparison to a placid Sunday market back home in Germany. No, this is about survival: every day, people fight to make a living for themselves and their families. 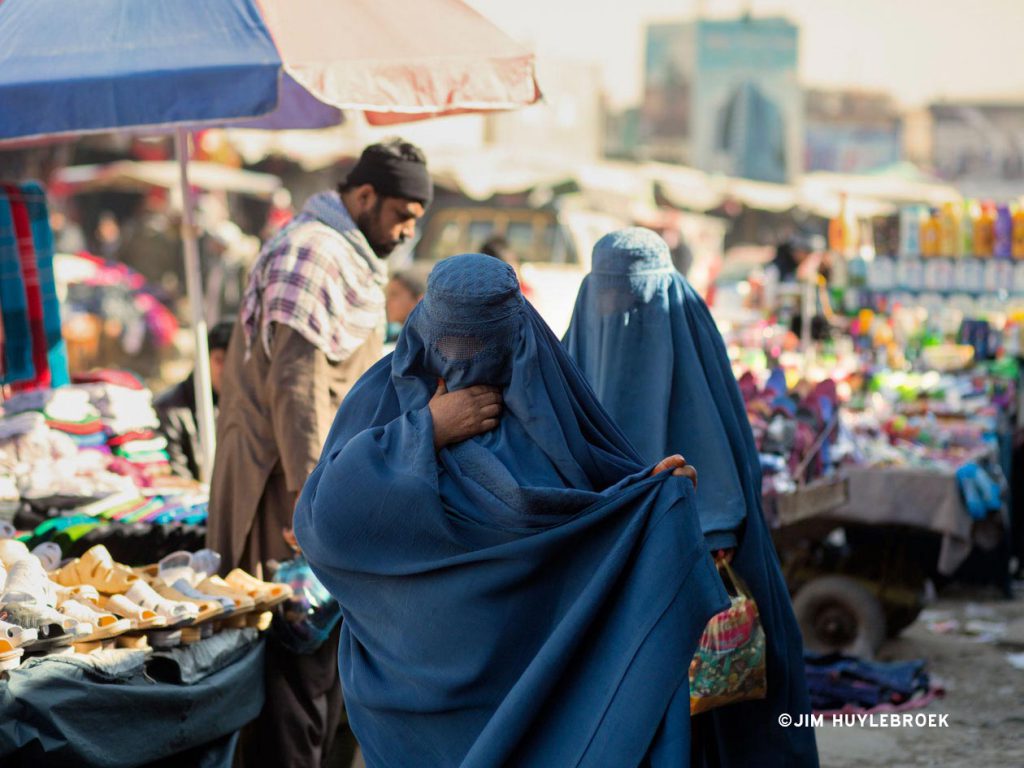 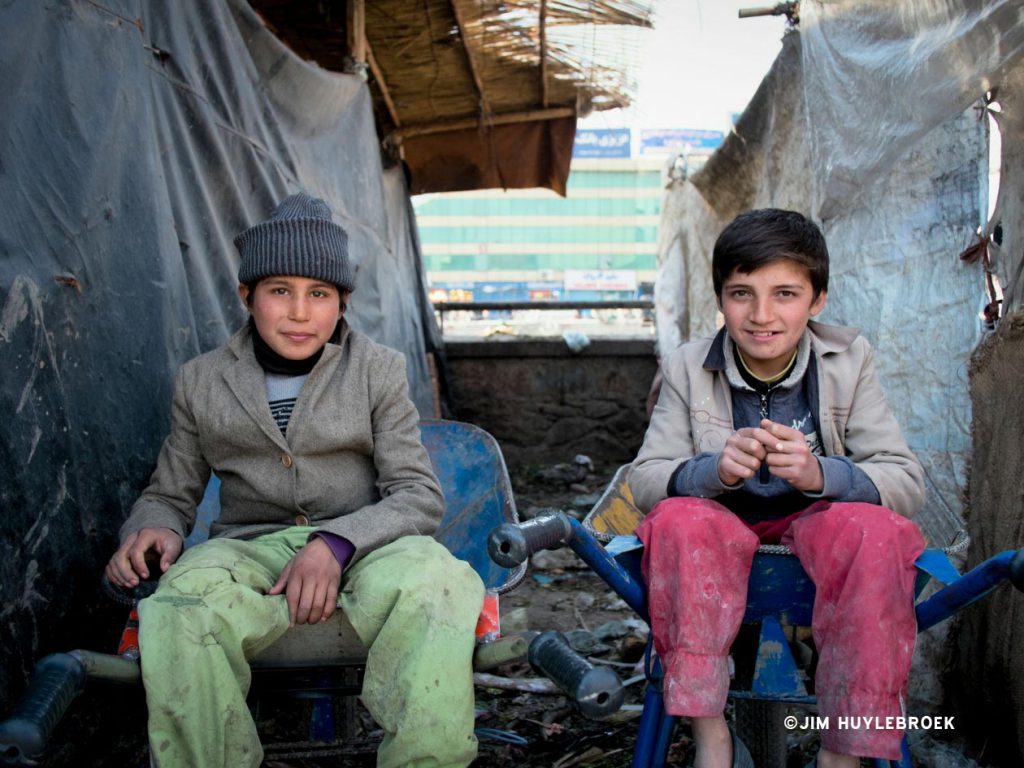 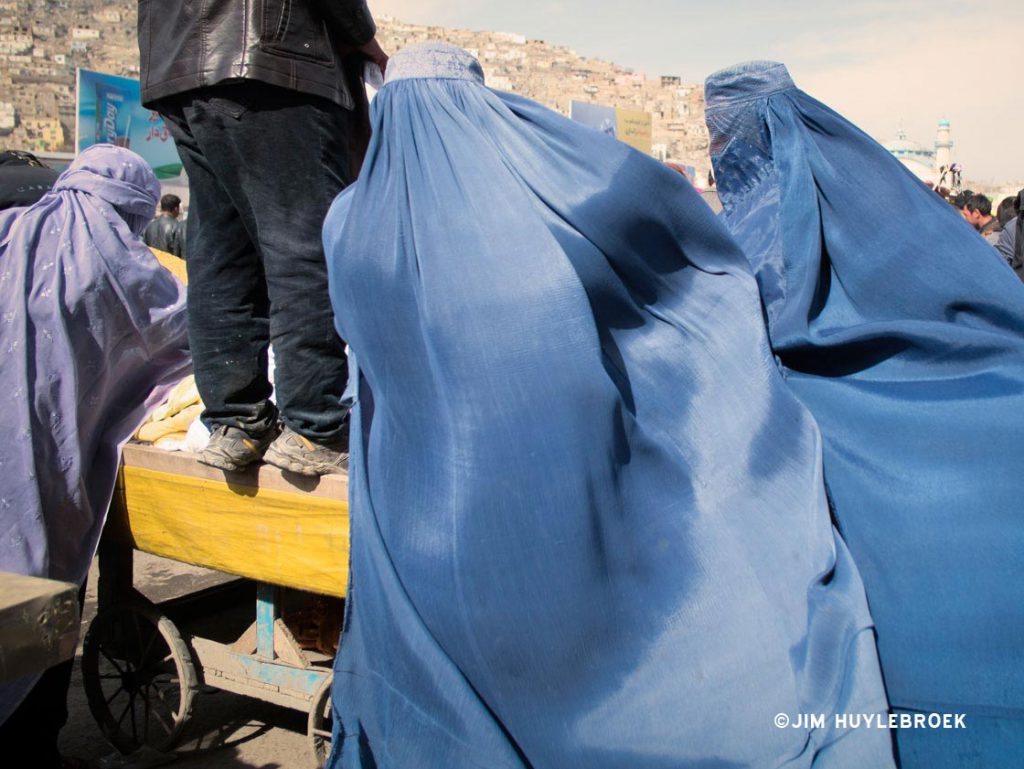 Next to Kabul River, it’s a different picture. A dried-out riverbed, full of trash. Men, young and old, who have long given up, come here to smoke heroin. Not everyone copes with the harsh living conditions. The years of war have caused deep wounds everywhere, the terror that continues to flare up slows down the healing process. 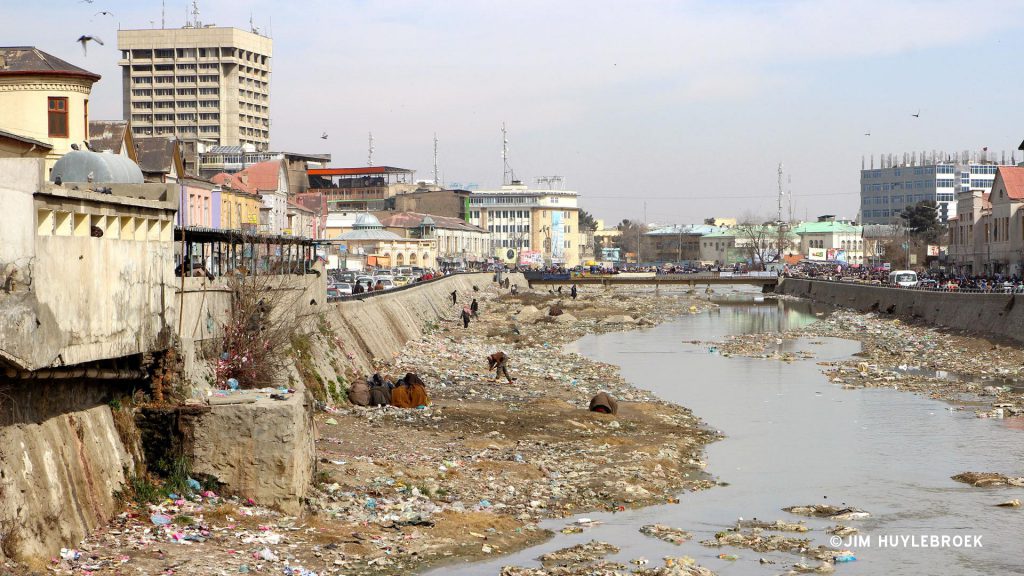 A little food on the roadside, a green tea. I try to grasp and absorb the city’s soul. So much ambivalence: the people here are often very kind and grateful, the struggle a daily reality, the future uncertain. Sometimes Kabul and the surrounding Hindu Kush are full of beauty, then again, destruction and infinite suffering.

I finish my tea and walk back. My host has already prepared a water pipe and dinner. His friends also join us, only men of course. The cordial, wonderful Afghan hospitality!

Today I will travel to the North of the country.
Mazar-i-Sharif.

After staying in Kabul for one week, I start my road trip to the capital of the province Balkh on a sunny morning. I’m very excited to discover what’s hidden behind the mountains that surround the city. Maybe you are trying to imagine what such a journey might look like: a bullet proof vest, a helmet, a Kalashnikov, as part of a NATO convoy. Nope, not quite! Rather: a white 90s Toyota Corolla, ten CDs with the best of Indian pop music, green tea and a little bread. My biggest fear? That I might be able to speak fluent Hindi after enjoying the CD collection…

Tanim is our driver. During the rule of the Taliban he fled to Pakistan, but after several years of asylum there, he decided to return in order to start his own business. He sells surveillance cameras in his little shop in Kabul. Tanim has a big heart – and many ideas for the new Afghanistan. He wants to show me some of his country, which is why he suggested driving to Mazar.

While I wait on the street for him to pick me up, a frowning security guy glares at me, his AK47 ready to fire. These guys always look like they will shoot you any minute. And since this has already really happened here a few times, a bad feeling comes over me. Normally, people here react when I encounter them in a friendly way, when I wave or smile. But this guy here, he just doesn’t want to be my friend.

Alright, I think, I guess that’s the disadvantage of traveling to Afghanistan, you can never feel safe.

No surprising realization, I admit.

Finally, our friend comes and off we are. As soon as we leave the city behind, the scenery becomes monotonous. Kabul already seemed grey, but this here – really lacks any color. We pass a few checkpoints without any major issues. Time and again, there’s a Russian tank wreck on the road, which is slowly turning into a dirt road, followed long by nothing. Afghanistan seems empty. 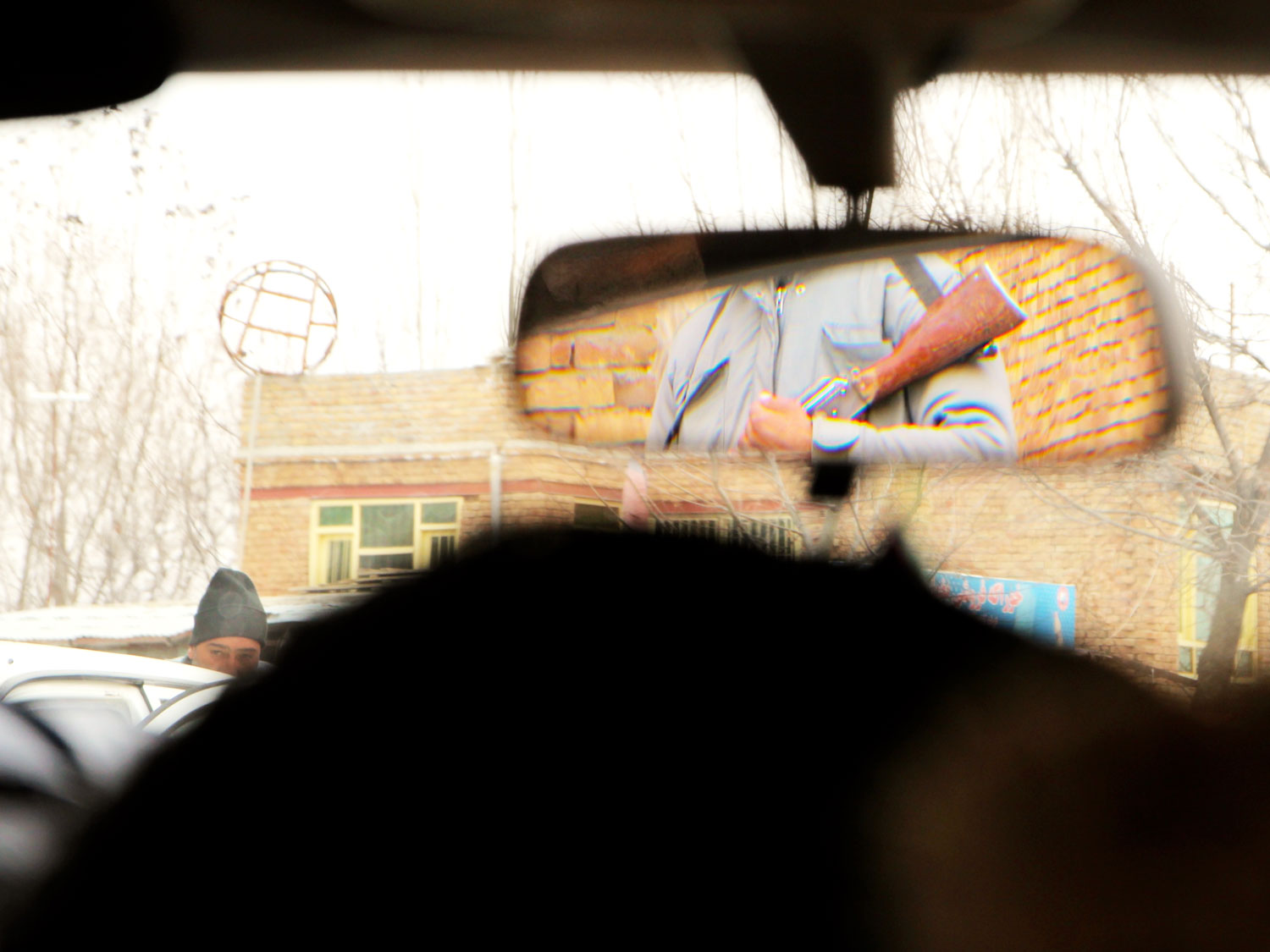 Tanim explains that the Salang Pass connects northern Afghanistan with Kabul, »and it’s one of the most famous passes in the world!« In fact, it’s an adventure: at nearly 4.000 meters, the Hindu Kush is crossed, and I have never experienced such an impressive drive. We go higher and higher. The rise seems to have no end. At times, jagged cliffs tower into the sky on both sides, then the slope steeply drops down right next to the road. At 3.400 meters, we enter the Salang Tunnel, which was the highest tunnel of the world until 1973. By the way, the mobile reception is excellent – so much for developed countries! 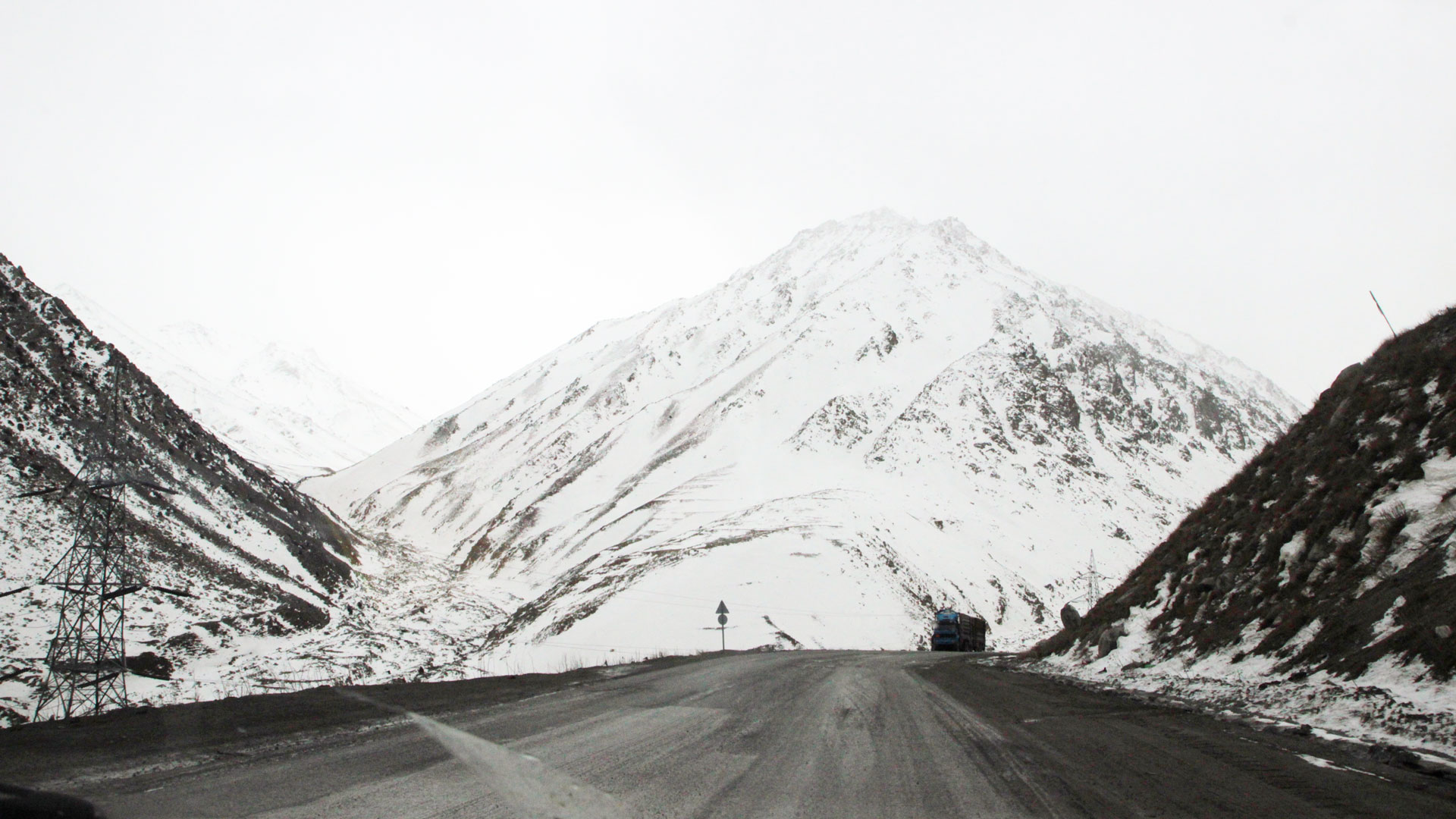 Now that we are slowly approaching the valley, the grey vanishes and finally the country shows what it has to offer: red rock, deep blue rivers. I try to imagine what it looks like in spring when the bushes and trees dip-paint the landscape into a vibrant green…

We have crossed half of Afghanistan, when we enter Mazar-i-Sharif after an eight-hour drive. Mazar, as the fourth biggest city of the country is referred to, was the first city that was freed of the rule of the Taliban by international troops in 2001. And since this day, it also remained one of the most peaceful places of Afghanistan. Tanim has found an accommodation, a kind of hotel, where we park our car. I enjoy strolling through the streets, many young people approach me – in astonishingly good English! – to ask me where I’m from, what brings me to Afghanistan, how I’ve been. I feel very welcomed.

But that’s not the only reason why the trip to Mazar was worth it: the city is known (and only known for!) its Blue Mosque – one of the most beautiful ones in the country. Splendidly gleams its blue marble dome, especially in the morning. And so I stand in front of the Mosque on this Friday, the believers gather for prayer and the rising sun dips the dome into a soft light. Marvelous. The grave of Mohammed’s cousin is said to be here – but whether it’s true or not doesn’t matter, this place is fantastic. 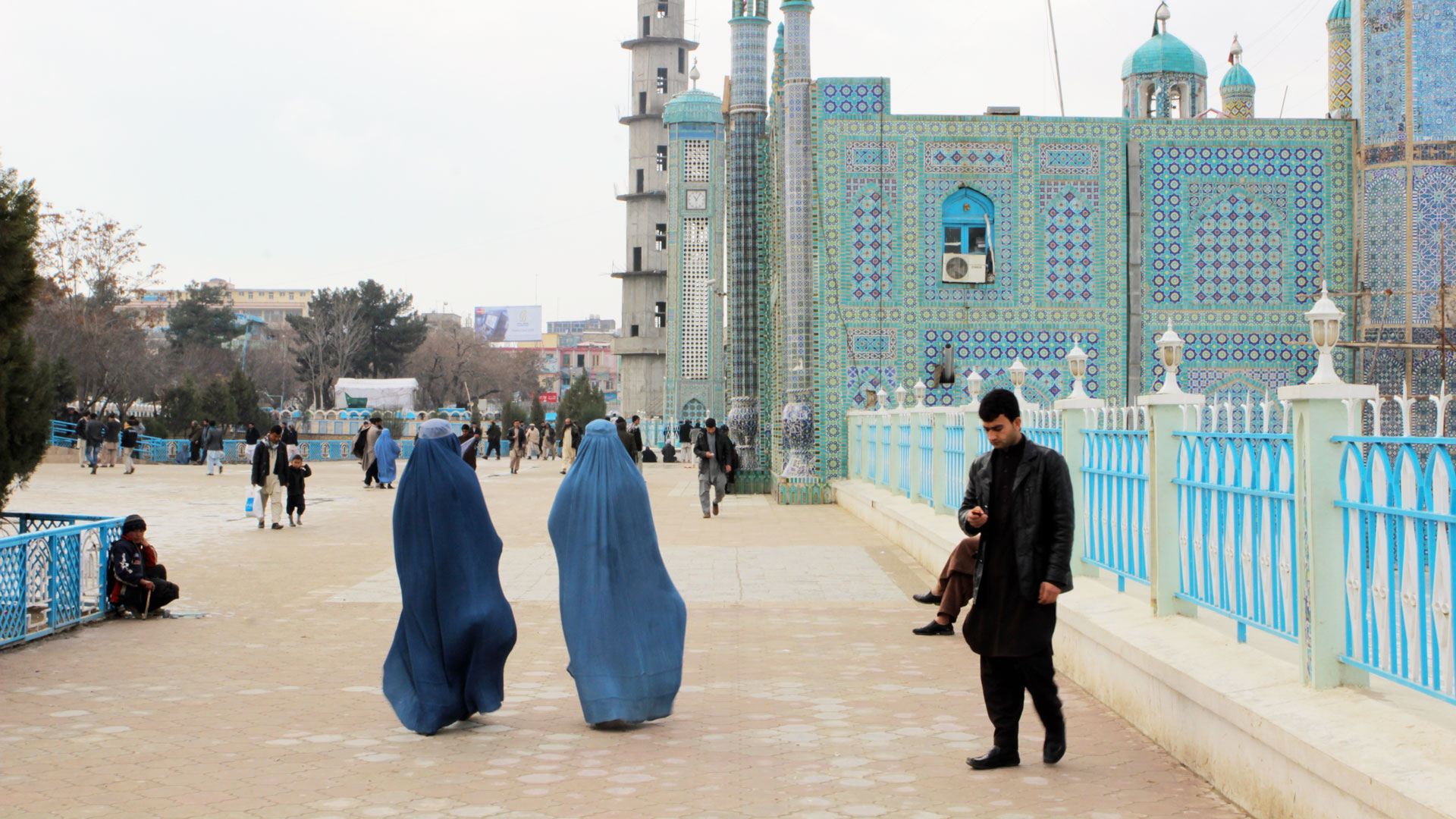 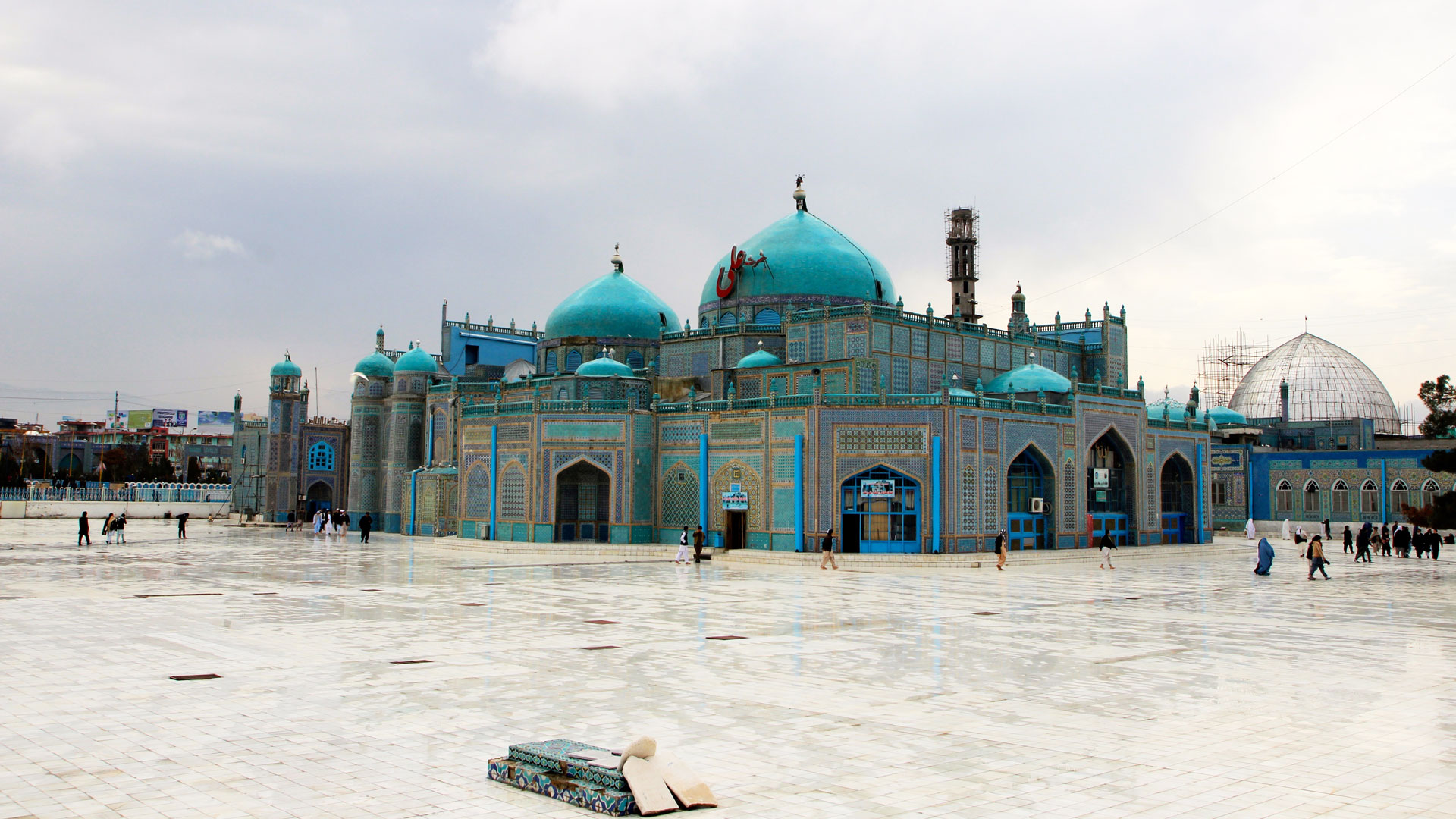 Back in our lodging, we are told that we can’t stay.

More or less conclusively, the owner explains to us that foreigners are not allowed here. It’s a shock. But after a cup of tea and with a heavy heart, we decide to return to Kabul. And that, even though at night the highway is still said to be controlled by Taliban, time and again. But what choice do we have? When we set out to climb the pass, the descending sun bathes the city in a golden light. The risk of getting stopped by fake policemen or Taliban is now unequally higher than by day. I keep texting our position to my sister, just in case.

And in fact, I see a Taliban on his way to »work«, at least that’s what Tanim assumes. With a turban and his face partly covered, he approaches the road from the mountains. I catch my breath. This isn’t TV, this is reality! What if he stops us? But I guess it’s still too busy. He seems to be waiting for his friends and doesn’t pay us any attention. Luckily, the traffic stays steady and that’s a relief to me.

After the Salang Pass (which is also a breathtaking enterprise at night) we head back to the capital. Too short of road trip, but nevertheless it was worth the journey! If you happen to be in the area sometime, I recommend this trip.

My last days in Kabul are long and intense. The things I experience here show me, once again, how good I have it at home. But also, that it’s worth traveling to places where I can witness how history is being written. And leave again. 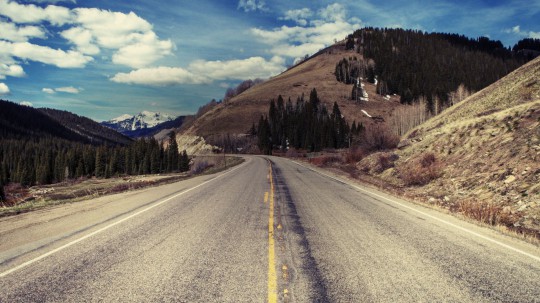 Colorado is famous for its splendid mountains, to which John Denver’s anthem is dedicated. Dirk Rohrbach seeks their unique thrills, biking over some of the highest passes in the Rocky Mountains. 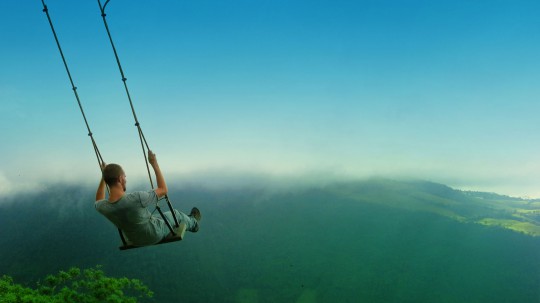 The End of a Journey

Living out of our rucksacks for a year and a half, always on the move. Aylin Berktas and Stefan Krieger realise that going home is scarier than starting out.